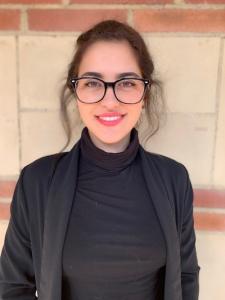 This alumni article was written by Lauren Rosenthal, a Moorpark College student and student worker with the Ventura County Community College District.

Before Mersedeh Kolyaei joined the Moorpark College (MC) family, she worried that her dreams of attending UCLA and working in the medical field wouldn’t happen. Now she is a UCLA graduate, a West Coast Doctor of Pharmacy candidate and an intern at CVS Pharmacy. She says her time at MC was fundamental to her accomplishments and helping her create an unforgettable career path.

“As an immigrant, it seemed a little hard to reach goals and make dreams come true. That is, until I attended Moorpark College,” she said. Mersedeh emigrated from Iran eight years ago and began taking biology classes at MC as a junior in high school.

In addition to her interest in medicine and biology, Mersedeh discovered her passion for anthropology at MC. “I fell in love with anthropology as a science that saw humans as a whole and not just biological beings, which is sometimes what is lacking in other pre-med majors,” she explained. Professor John Baker and Professor Andrew Kinkella inspired her with their vast knowledge of anthropology and their passion for the subject.

Mersedeh soon learned how to apply her love for anthropology to her pre-med ambitions, and devoted herself not just to her studies but to student advocacy.

In 2015, she founded and became president of the Peer Health Club at MC. Her responsibilities included connecting students in pre-health majors and providing her peers with career and resume-building opportunities. She was elected the Associated Students of Moorpark College (www.moorparkcollege.edu/as Director of Student Organizations in 2016, where she acted as a liaison between the student body and clubs and voted on policy regarding college affairs.

“My time at MC supported my career choices and helped me build a foundation that got me to where I am, and I am forever grateful for everyone who helped me. No one at MC says your dreams are too big. Everyone helps you along and always makes goals and dreams reachable.”

Mersedeh’s goals for the future shine even brighter than her current accomplishments. She prepares for the long-term and plans out her aspirations for the next 10 years. After interning at CVS Pharmacy, she would like to do a residency in either oncology or infectious disease. Then she would continue working at CVS, go back to the Ronald Reagan UCLA Medical Center in Los Angeles, where she interned at previously, or start working at Amgen.

Her ultimate goal, though, is to open a pharmacy where she can provide chemical and herbal medications to her patients.