Moorpark College is closed to the public. We are offering services and most classes remotely. We care about your safety and education and are working to provide safe learning environments. For the latest updates, visit Alerts.

Moorpark College was established in 1963 by the Governing Board of the Ventura County Community College District. Soon after, a 134-acre site on Moorpark's eastern city boundary was secured in a combination donation/purchase from the Strathearns, a local ranching family. 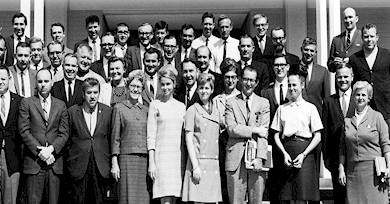 Enrollment doubled in the first few years as the College added vocational education to its role of preparing students for transfer to four-year schools. Dr. Robert Lombardi became the College's second president in 1971. Dr. Ray Hearon held the longest term as president, serving from 1974-1989.

The Moorpark College Foundation was formed in 1980 to spearhead construction of an athletic stadium, amphitheater and observatory. In 1985, the 4,000-seat stadium was named for Paul Griffin, Jr., a local developer and major benefactor. In 1987, the Carlsberg Amphitheater and Charles Temple Observatory were dedicated as part of the College's 20th anniversary celebration. During the 1980s, several other buildings were completed: Applied Arts, Creative Arts, Humanities/Social Science, Music, and Student Services. In 1989, the Center for Learning Assistance Services opened for service.

Dr. Stanley Bowers served as president from 1989-1991, followed by Roger Boedecker, who served from 1991-1992. Dr. James Walker became president in 1992, but was called away to serve as Interim Chancellor in 1995. Dr. Darlene Pacheco served as interim president during Walker's absence from 1995-1996.

Fiscal constraint, brought about by the state's economic downturn, stalled growth at the College in the early 1990s. Despite hard times, the College completed state-funded construction of the Communications Building (1991) and the Performing Arts Center (1995). The forensics team maintained national ranking while the athletic teams continued to dominate the Western State Conference.

In 1997, the Child Development Center and Disabled Students Center were expanded. In 1998, two new conference rooms were built in the Campus Center and an acoustic shell was installed on the Main Stage of the Performing Arts Center. In 1999, the 27,000 square foot Fred Kavli Science Center opened, housing the math, science and computer studies programs. This facility also provides student access to a 50-station computer lab.

In 1999, the Instructional Biotechnology Program opened an 8,000 square foot bio-manufacturing facility on the California State University at Channel Islands campus and The Moorpark Review a student creative arts journal debuted with the publication of original student writing and photography. Also in 1999, students were first able to access their academic records and register for classes on-line at: www.moorparkcollege.edu.

In 2000, a high school for high potential juniors and seniors opened on the Moorpark College campus. In 2001 the first High School at Moorpark College graduating class numbered 55. In March of 2002 Ventura County voters passed Measure S, a bond that will provide $356 million in construction financing for the Ventura County Community Colleges, of which $104 will be used to renovate/expand Moorpark. Moorpark is poised to grow to 19,000 students by the year 2015 and bond monies will fund 23 new or renovated classroom buildings and related facilities.

Through its continued attention to quality and innovation, Moorpark College has become one of the top community colleges in the nation. Based on enrollment Moorpark ranks second in the state for transfer to the University of California and California State University systems. No local college does a better job preparing students for their future. Moorpark College graduates are making meaningful contributions to both the public and private sectors in Ventura County, the state and the nation.