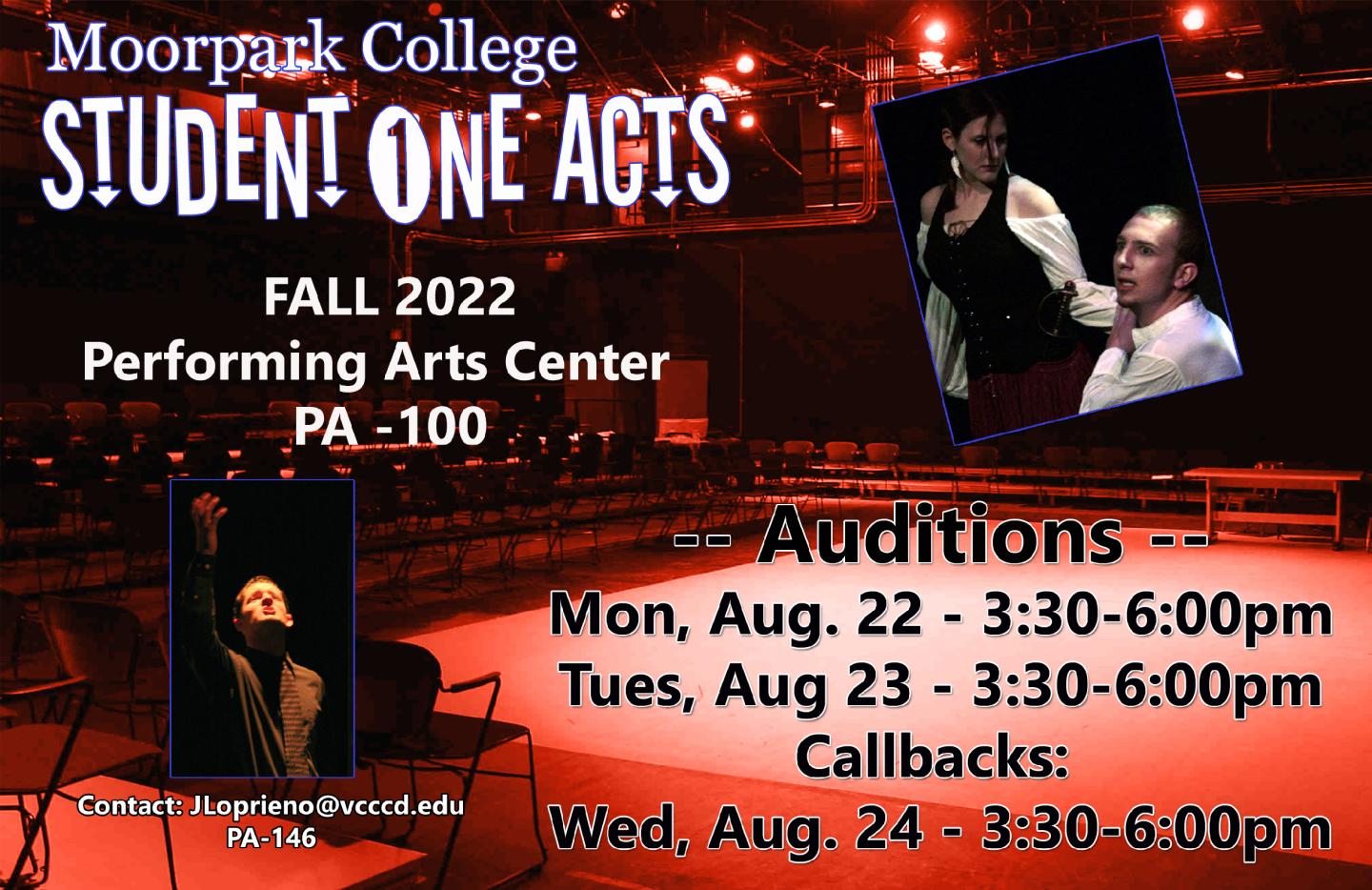 Fall 2022 Callback lists
Cast Lists for the Fall One Acts

to determine what’ll happen to Grace when the apocalypse, a future haunting Grace’s dreams,

GRACE- Female, 20s, any ethnicity. Anxious about the future, became aloof and emotionally

distant in order to protect herself mentally. Her dreams seemingly predict a great change within

the world (like 2020), or they just reflect her emotional state.

readings to people. Tries not to think about how distant Grace has been.

The roles of Elle and Grace can be genderbent so that the relationship is between two gay men,

or between two non binary individuals, instead of two lesbian women.

Audition Scene for Two of Swords

Synopsis:
A normal conversation spirals into a nonsensical fever dream as one friend realizes he’s not an important member of the group.

Mimi — Early 20s. Any race. Witty with a snarky streak. Would probably be a stand-up comedian if she had the confidence. Has a tendency to repeat herself.

Steven — Early 20s. Any race. Never a dull day with him. Proud extrovert and very open about himself. Likes to over complicate, just to keep it spicy.

Audition Scene for That's Your Cue

Frank has personal struggles with his identity, homosexuality as a military man in the turbulent times of WWII, as he has met a man he loves overseas, meanwhile he is friends with a girl named Irene back home.

Frank Roberts - Frank struggles with his autonomy, sense of self, identity and true feelings of homosexuality as he realizes that aspect of himself when he meets a man he loves at Pearl Harbor military base in Honolulu, Hawaii.

Irene Dansen - Irene is an incredibly sweet girl Frank bonds with right before he heads off to war.

Thomas Forthright - Frank’s lieutenant at the overseas base and love interest.. He is very strong, but pressure building up with the tensions of forbidden homosexuality in the military during WWII will leave him open and vulnerable during a conversation with Frank.

SYNOPSIS: Late one night at a truck stop diner two wandering souls, one old – one young, have a chance encounter that will change each other’s lives forever.

CHARLIE aka Tom Waits (Plays 30-40/ Caucasian) A hard life has etched itself into Charlie's face. He possesses a warmth and kind spirit, always calm and philosophical in conversation.

MOLLY: (Early 20s/ Any Ethnicity) Her iron-clad defenses are up to hide a gentle lost soul. Short jet-black hair with red streaks and too much makeup give her child-like face a hard demeanor.

ANGELA (20-40 / Any Ethnicity) She's the sole waitress at the truck stop during the graveyard shift. It's her domain and she’s seen it all. She can be sweet as sugar and then flip to be tough as nails.

While navigating the finer points of young adulthood and

ALESSANDRO (ALEX) Early to mid twenties; student in a

LOUISA Alex’s ex-girlfriend; early twenties; happens to be in the same class, which started soon after her and Alex’s breakup.

MELINDA One of Louisa’s best friends; early twenties; also in the class.

PROF. UNTERRICHT (PROF.) Professor of the class and ordained priest of a pay-to-be-ordained online service.

While working on an assignment to create a fake religion, four students discover that their class is also a sex cult.

attention to her style/aesthetic.

Detective Fletcher “Lucky” Donelly is still chasing the one that got away. Through a series of attempts he runs into an old friend and an old enemy. Thankfully, his partner, Dominique

"Remy" LaRoux is by his side to catch the villainous Fabian Gould in the act. Thanks to an old time enemy, Katy Sugar, Lucky can possibly get what he’s been after for a very long time, justice for the death of a friend.

Fletcher "Lucky" Donnelly: A man in his late 20's/early 30's. He's let the escape of Katy get to him. Still the tackiest dresser, just much more unkempt than before.

Dominique "Remy" LaRoux: An androgynous person in their early 20's. Wants to support Lucky, but knows its time to move on. Just as clean cut as before.

Katy Sugar: A woman in her late 20's/early 30's. Is very good at pretending she's not scared. Less fanciful, just as flirty.

Norman Kilroy: A man in his mid-40's. A detective on the homicide squad. A New York City boyin a Los Angeles world. Pronounces his name like 'Nah-min' and Fabian like 'Fey-be-in' Fabian

Gould: A man in his mid-20's. New face on the block, he's made his mark on the underground by coming out of the gate swinging, AKA killing a metric ton of his competition.

Walter Liang: A man in his mid 40's. No longer working for Katy, just running his restaurant. Has added Mexican food to the menu. Still has a doctorate in sociology, it's still worthless.

Note: Walter and Norman are played by the same actor

vacation home in search of quick thrills and easy thrifts,

but what they find is more than either of them asked for.

Ryan 21. Canadian. Reckless and easily bored. The type to skip game instructions and then get angry when he doesn't know how to do something. Either thinks he's invincible or that everything is just a bit of a simulation. Craves the adrenaline rush of a good scare paired with a bit of danger, even more so when subjecting someone else to it. Has a very soft punk style going on, with a large leather jacket.

Ben/Benjamin 20. Asian American. A bit obsessed with antiques, but mainly tech and woodwork.  Allergic to failure, so he either puts all of his focus into one thing or rejects the notion to try. Refuses to go anywhere alone, for fear of being a loser. Reckless as well, but not as bad when around Ryan. Hates horror, but puts on a brave face so as to not encourage more jump-scares from his friend. No matter how cold, he refuses to zip-up his new, blue puffy down vest.

Synopsis: King Arthur and Merlin are cursed to live in the modern day, Merlin tries to find a cure but Arthur seems to like the time he’s in now.

Narrator: The narrator at the beginning of the show. Helps tell the audience of our main two characters.

Arthur: Arthur Pendragon, king of the Britains and wilder of Excalibur. In modern times he runs a furniture store specializing in tables. Living his "best" life with his wife and child

Merlin: A powerful wizard and Arthur's most trusted ally/friend. Travels the country as "Marlon", a magician who entertains countless people. Is seen as Gwendolyn's uncle

Gwendolyn: Arthur and Rosie's daughter. Thinks the world of her father and hopes to be like him one day. Is a huge history fan, but does not know her fathers true identity

Rosie: Wife of Arthur and Gwendolyn's mother, very supportive to Arthur. While not knowing his true identity, she may know more than she lets on.

Morgan: Morgan le Fay, sister to Arthur and former lover to Merlin. Is the one who gave the two the curse they suffer from. Believed to be slain by her brother long ago

Synopsis Mel, a college freshman, has just come back home for Christmas. While returning home should be exciting, Mel has made some realizations at school that may not be so thrilling for their mother.

Mel 19. Non-binary. Assigned female at birth. Grappling with their sexuality & gender. Just came back from their first semester at college.

Laura 50's. Mel's mother. Has a close relationship with her daughter.

Passenger #1/Voice #1 Any age. The physical manifestation of the voices in Mel’s head

Passenger #2/Voice #2 Any age. The physical manifestation of the voices in Mel’s head

Two friends learn more about each other after their plane crashes, and they are stranded on an island together.

Andy: Male. Has a great sense for adventure. He loves the wilderness and is kind of a know it
all.
Harper: Female. She is a very relaxed and intelligent individual. She works smarter not harder.