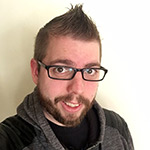 Bair has worked in the game industry for over 10 years as a Game Designer, Level Designer, and Environment Artist. He has worked for several studios most notably Disney Interactive / Buena Vista Games, Atomic Monkey, and also helped Tim Burton with his online animation Stainboy.

Between working for game studios and freelancing as an artist, he has also taught digital entertainment and game design for seven years. Bair now spends his time focused on raising his son, Bastian, teaching at Moorpark Community College, and working on his own games at his company, Mind Factory Studios. 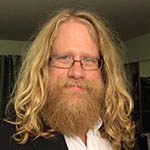 Tom Smith has made a lot of games. He wrote the first English rules for the mega-popular board game Settlers of Catan. He has made console games going back to the Nintendo 64 on through multiple Xboxes and Playstations. He’s made educational games for kids, PC real-time strategy games, and light-hearted comedy romps. He’s spoken at conferences and schools and has written articles for ancient things called magazines.

Most recently he’s been working on mobile games, including the Apple Design Award winner Where’s My Water?. Tom is currently a Lead Game Designer at Zynga, working on social mobile puzzle games such as Crazy Cake Swap.